Talia Eden loved Foster Madden for one year, two months and eleven days. It was on day 438 that her love died. The day he chose to marry her best friend. The day she vowed never to think of Foster again.

Until years later when he has the audacity to show up in her small hometown of Quincy, begging for her help.

The ink on his divorce papers is barely dry, yet he comes armed with apologies and promises. She knows it’s all a ploy. Foster is the king of games and secrets. But he’s got delusions the size of Montana if he thinks she’ll help him train for a world championship fight.

Except Talia has forgotten exactly what made Foster famous. The man has dedicated his life to victory. He’s steadfast. He’s determined. And he won’t stop fighting until he’s won her heart.

Is there anything better than a yummy second chance romance?! How about a delicious slow burn with a side of groveling hero and several good ‘ol helpings of hate to love/angst.  ALL.OF.THAT and more is what you are in for with Garnet Flats. So good y’all. I have loved every single book so far in the Eden’s series and frankly couldn’t wait for Talia’s turn after the glimpses we’ve had of her in the previous books. Author Devney Perry did not disappoint with Talia and Foster’s heart wrenching journey back together after seven years apart and a lot of bitterness, hurt, lies, and misunderstandings.

Garnet Flats is an emotionally gripping tale about a young woman finding her forever person only to have him marry her closest friend instead. That life changing, unforgettable kind of love that when lost you never fully recover from. Oh the devastation your first true broken heart leaves you with, I’m sure most of us remember it well. I know I do. I dove right into this unique twist on the, left me for my best friend trope, and devoured every word of this within a day, as it brought me right back into my feels of first loves, first heartbreaks, and lessons in forgiveness in relationships.

Talia Eden loved her college sweetheart Foster more than anything. She saw her entire future with him. Then in a devastating blow he shocked her by marrying her best friend and roommate. Seven years later he shows up freshly divorced and ready to make amends and win her back. But if he thinks finally telling her why he did what he did will just easily wipe the slate clean, he is in for a rude awakening. Talia is still hurt, and quite frankly straddling that thin line between love and hate.

When Foster, a UFC fighter ( um holy hotness people 🔥🤤) shows back up in Quincey determined to finally tell the only woman who’s ever truly held his heart why he really broke hers all those years ago he knows it’s not going to be easy peasy. Getting Talia back may be the hardest fight he’s ever taken on. But he’s ready, heart in hand, to jump into the ring and fight it out until he emerges the victor. He’s not looking for a belt, nor a title. He only wants her. He knew whatever anger she threw his way was absolutely his fault and he was ready to own it. He wanted to lay it all out there on the line, while also helping her to remember just how good it used to be between them. He knows he still loves her, and he’s sure hoping she feels the same. Well anger isn’t the only thing causing the heat to rise between these two.

Everything about Talia and Foster had me hooked from the very beginning. From being back in Quincey, to scenes with Eden’s from the past books in the series. Which is awesome because I am never going to want to part with this series. I will go back for a total series reread at some point for sure. This book broke my heart just as much as it healed it. This standalone with interconnecting characters told in alternating dual POV’s is a great addition to the series. You can start with Garnet Flats or start at the beginning with Juniper Hill today. I already can’t wait for the next book, Jasper Vale.

Devney is a USA Today bestselling author who lives in Washington with her husband and two sons. Born and raised in Montana, she loves writing books set in her treasured home state. After working in the technology industry for nearly a decade, she abandoned conference calls and project schedules to enjoy a slower pace at home with her family. Writing one book, let alone many, was not something she ever expected to do. But now that she’s discovered her true passion for writing romance, she has no plans to ever stop. 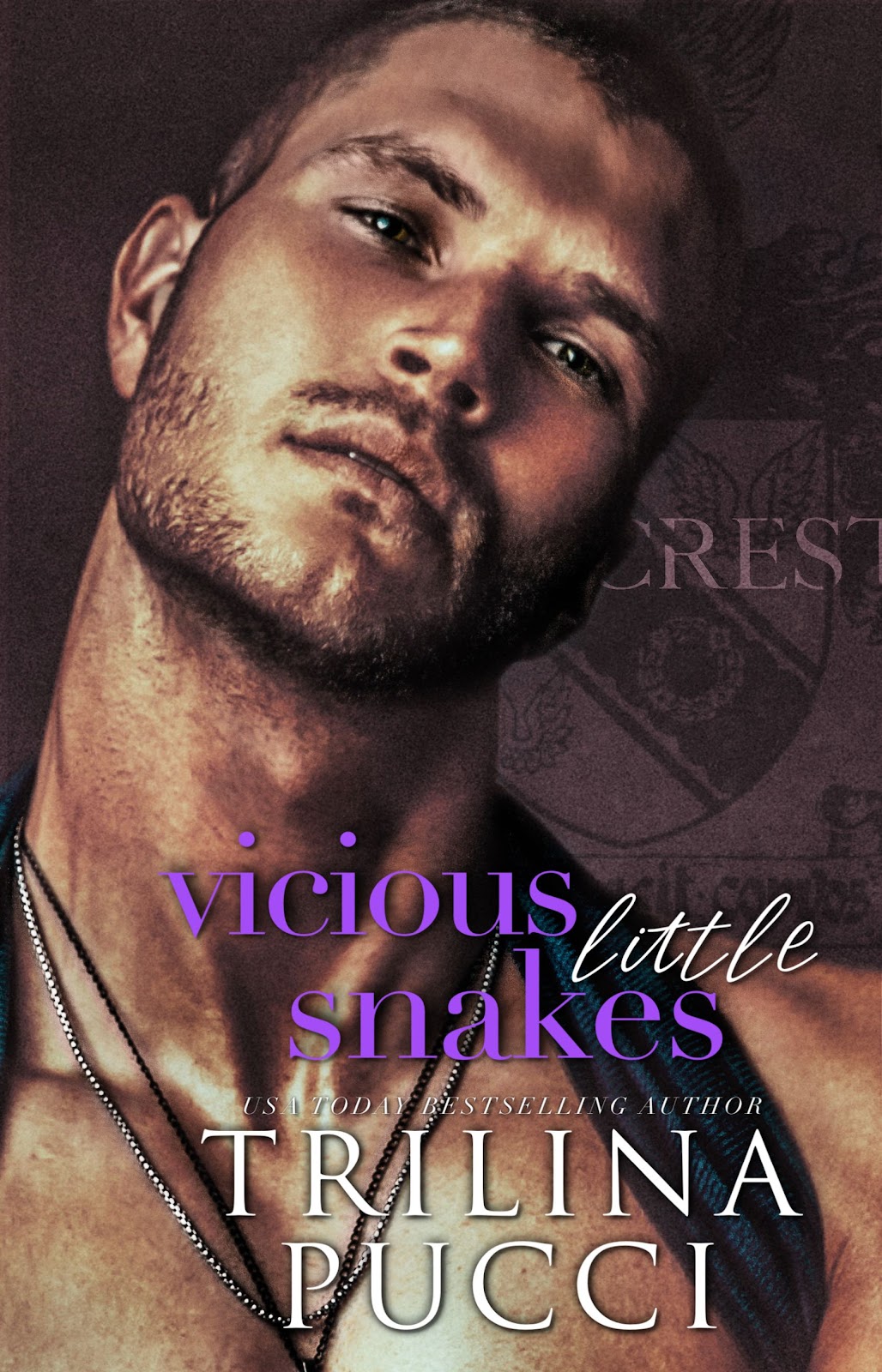 Prep school has never been so scandalous.

Despite that, I can’t recall a day when I haven’t thought about her at least once. On paper, we’re a perfect match–Only on paper.

In real life, we’re a disaster.
She hates me. Hates the way I dress–everything I say.
My basic existence.

But what I hate is more complicated.
Because I’m a moth to a gorgeous, petite, brunette flame.

I hate that I still remember what she wore the day we sat together in sixth grade.
And that I would move mountains for her smile.

I hate every guy that gets too close.
And that one of them gets to stay.

I hate that I want her so bad that I used my best friend to make her jealous.
But most of all, I hate that Caroline Whitmore is the one that got away. 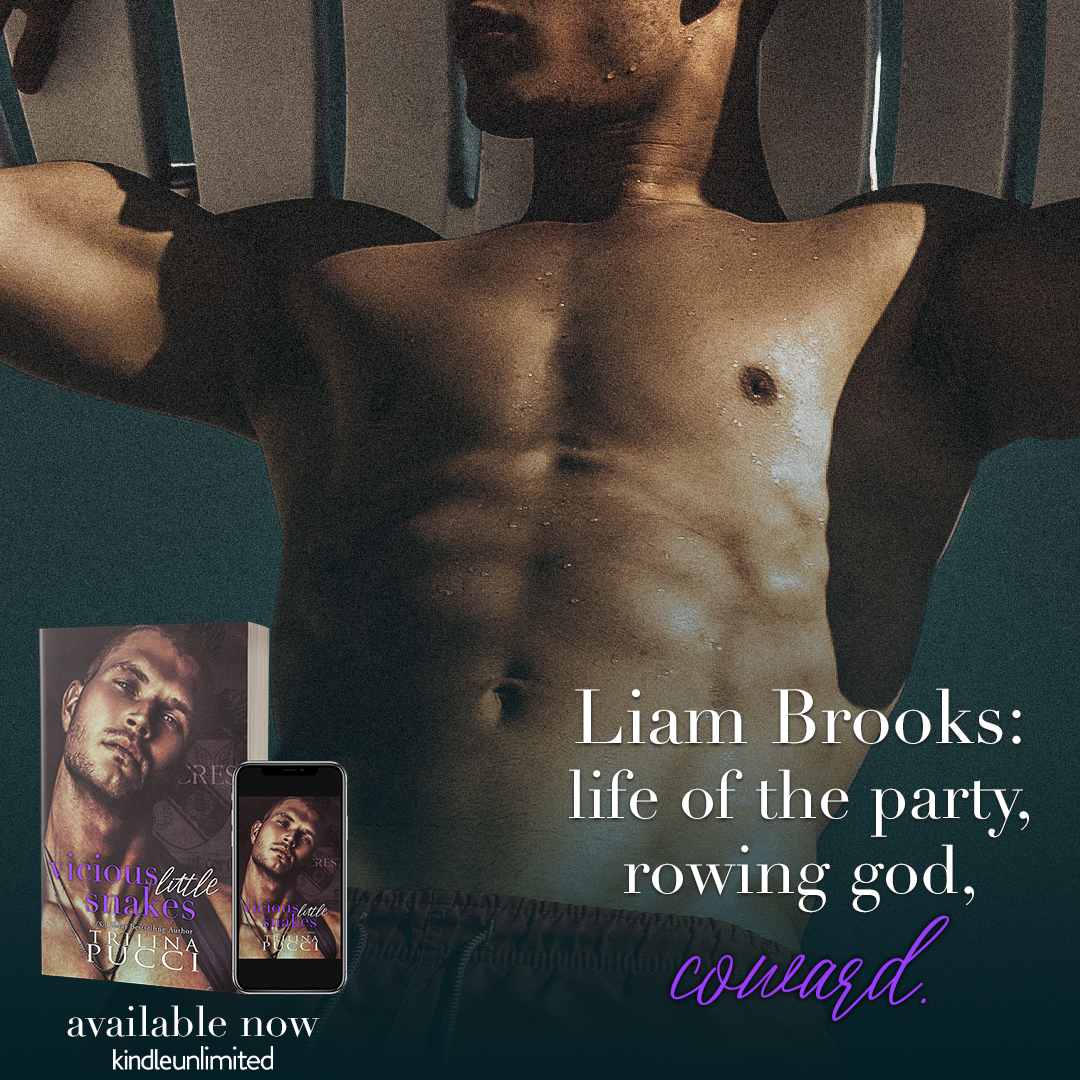 Download today for a special release price of $2.99 for
a limited time or read for FREE with Kindle Unlimited!
US: https://amzn.to/3jfC2iz
WW: http://mybook.to/vls

Not gonna lie, my friends…Hillcrest Prep series is a total addiction for me and Liam Brooks OWNS me!! He won me over in Filthy Little Pretties. There was just something about him that pushed him into my number one Trilina Pucci book boyfriend spot.  Liam and his journey to HEA with his oh so magically delicious mean girl.

Is completely unforgettable, excitingly unputdownable and at times frustrating yet still so phenomenal and fabulously written. This is a must read for all fans of frenemies to lovers, brothers best friends,  and second chance romances. It’s legit the perfect combination of everything you could possibly want, mixed with things you didn’t even know you needed. Yet… Trilina gave them to you in ways so good you will never forget this book!

So, what can I say about Liam and Caroline without giving anything away?! Well they’re two drop dead gorgeous folks, I’m talking pretty enough to make you cry with their modelish good looks and sex appeal. They ooze confidence. They simultaneously reign over their minions leaving them both terrified and envious of this delicious duo. They lash out with lethal tongues verbally bringing the smack down to anyone who dare cross them. But ultimately only each other has the ability to hurt the other one. Because really only the people you love the most can cut you deepest with just their words. Oh how I cried over this. It was devastating the heartbreak they put each other through to protect themselves and each other from heartache. What a conundrum right! You hurt your person, your ride or die, because you know you will hurt them in the end. Huh! Wow!  Try to figure that one out!

While maybe for a millisecond I might have been tempted to tell  ol’ Caroline to get on her diamond encrusted broomstick and fly back to her mansion, from very early on I felt like we needed more information about this mean, yet misunderstood princess, and WE GOT IT!! AI really loved how this author allowed us to discover little by little their history and why Caroline was the way she was. And Liam… well he had issues of his own. The way these complex characters had their revelations and grew from them into the characters they became. Oh my heart. It was perfect. They were fantastically flawed. Perfectly imperfect actually. Better together.

This book wasn’t just a story, it was a journey an experience, and it was one I won’t soon forget. I will look back on these characters with fondness and a love for all the pieces of them. The broken and the healed. The mean and forgiven. The snobby and the  humbled. This is everything I love about books and reading and life changing characters overcoming the obstacles to be with their one inevitable love.

Trust me when I say READ THIS BOOK. Please! You will need tissues😭, wine 🍷 , maybe some chocolate. 🍫 You will laugh and probably also want to throw your kindle. (Don’t actually throw it though). But whatever you do, read it. K?!

⭐️Six Imma need more than six this for a masterpiece like this, Stars ⭐️⭐️⭐️⭐️⭐️⭐️ 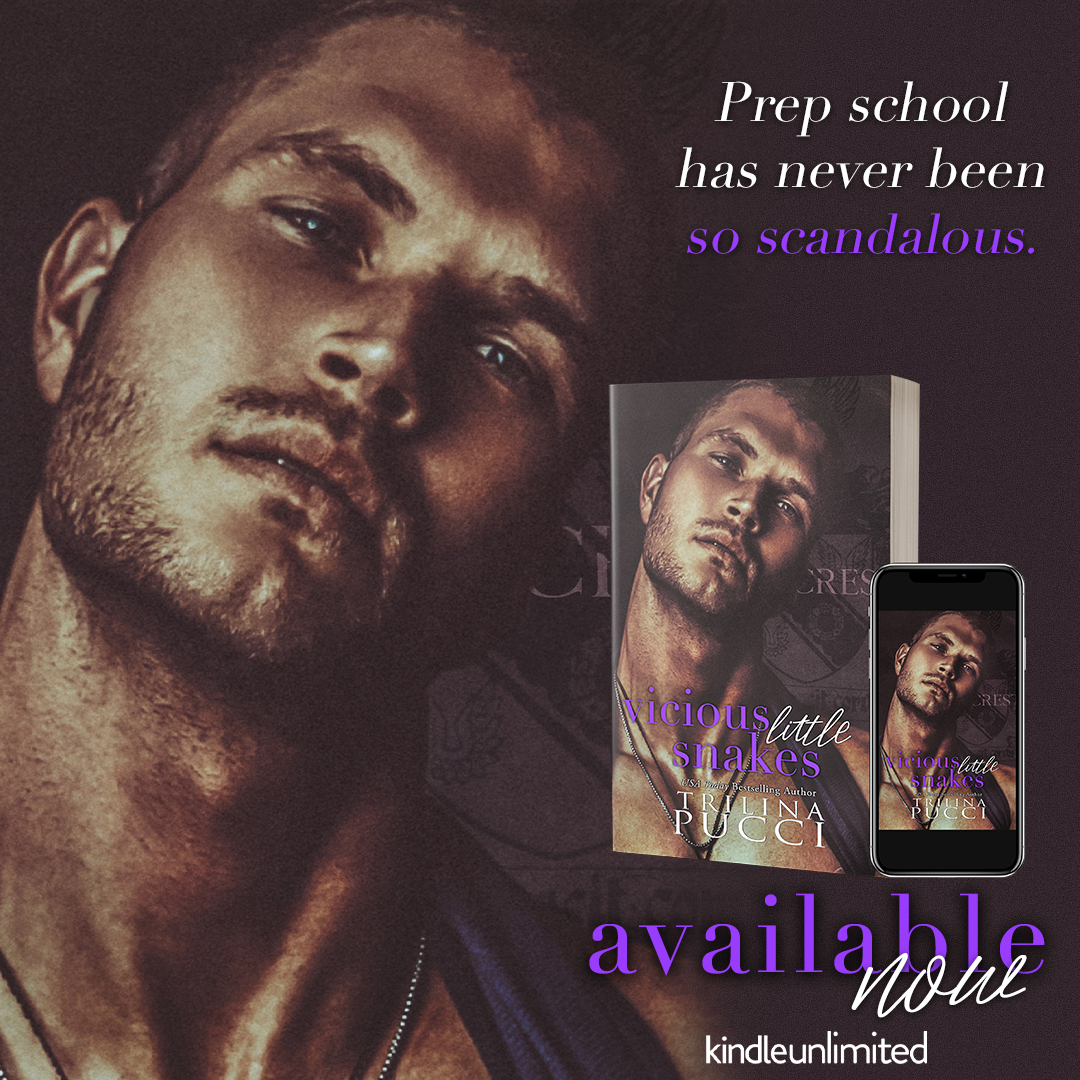 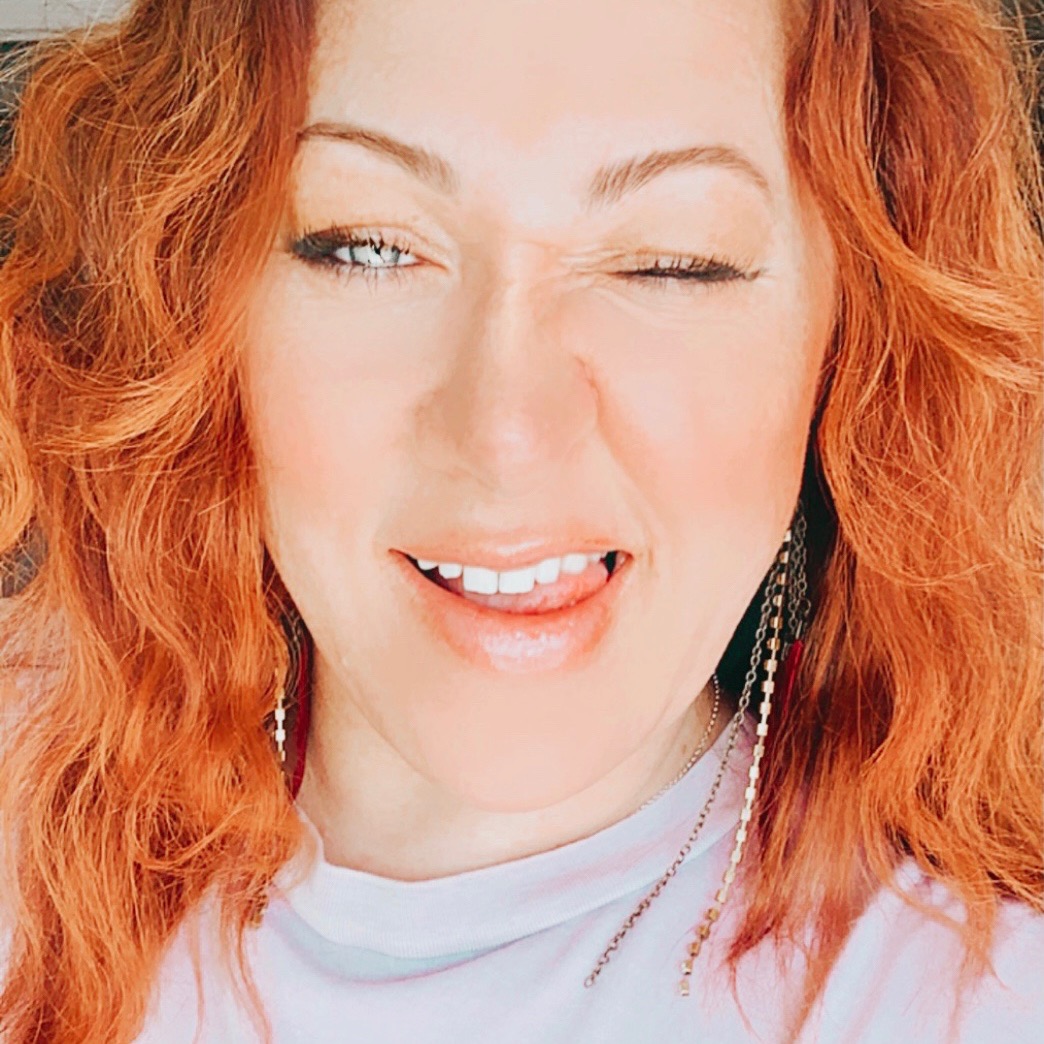 Trilina is a USA TODAY Bestselling Author, who loves cupcakes and bourbon.
When she isn’t writing steamy stories, she can be found devouring Netflix and re-watching Hamilton for the millionth time with her husband, Anthony and their three kiddos.
Pucci’s journey into writing started impulsively. She wanted to check off a box on her bucket list, but what began as wish fulfillment has become incredibly fulfilling. Now she can’t see her life without her characters, her readers and this community.
She currently resides in California and refuses to ever leave.